How to Edit GoTo Item?

I would like to use a couple of GoTo Items rather than a single Picker Item to navigate to Go-Around, Touch & Go or Land Sections, so that I can select verbally and keep my hands on the aircraft controls. (I understand that Version 5 will have the capability to select Picker destinations verbally, which would solve the problem, but we’re not there yet.)

Also, can the ability to set GoTo Properties be incorporated into Version 5?

Sorry, I am not completely following what you are trying to accomplish. When you say those are not available for GoTo items, what do you exactly mean by GoTo items? Are these Checkbox items?

Not sure if this helps or you are aware, you can also say MIRA GOTO {SectionName} or MIRA GOTO {ListName} from anywhere. So if you name your sections ‘Go Around’, ‘Touch and Go’ and ‘Land’ you can say GOTO TOUCH AND GO from anywhere. You can even add alternatives by naming the section or list and adding the pipe symbol | between alternatives.

…and you can say GOTO LAND or GOTO LANDING

Yes, I am asking about creating Checkbox Items in the Checklist, not about voice commands.

In an attempt to explain: Let’s suppose we have a Checklist with basic Start, Takeoff, Climb, Cruise, Descend and Landing Lists. Further, let’s assume that the Landing List has just two Sections, a Pre-Landing Section and a Land Section, both of which may have Mandatory Items. Now, I want to add a Yes/No Item (Label 1 is “Execute Missed Approach/Go-Around?”) midway through the Pre-Landing Section, which would branch if “Yes” is spoken to a new Go-Around Section to be added to the Landing List.

I think it is easier than the JSON script needed in a Picker. Under the Advanced panel of a Check Item, there is a Link Panel.

Also you can decide if you want this last item a normal checkbox, or a Check Box with the Label Only property set. My suggestion would be the latter. As soon as you click OK on this item it should jump you back. 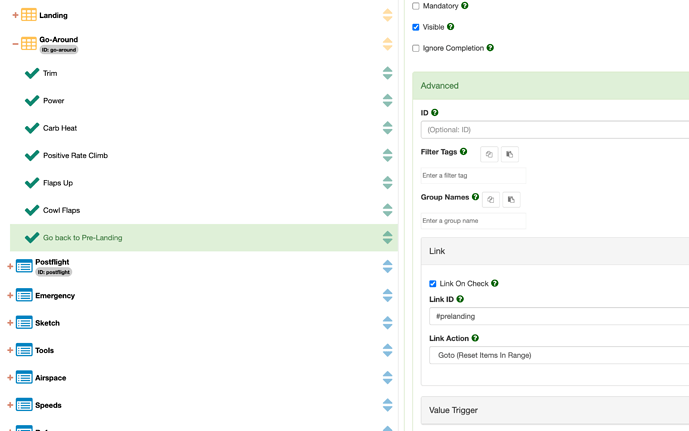 This should reset all items from the end of the Go Around to where you jump back to, so if that includes the Yes/No it will reset all of that as well.

Yes, that works perfectly. The option to select GoTo and Reset Range was always there. Somehow I missed it. Thanks pointing it out!!

I think I have a similar question, will try to be concise. On my landing checklist I added the go around yes/no. If I choose no, the next logic sequence will be after landing. What is the command to skip the items on the go_around when choosing “no” ? Edit: I think I figured out based on the thread but it’s not working. See screen shots 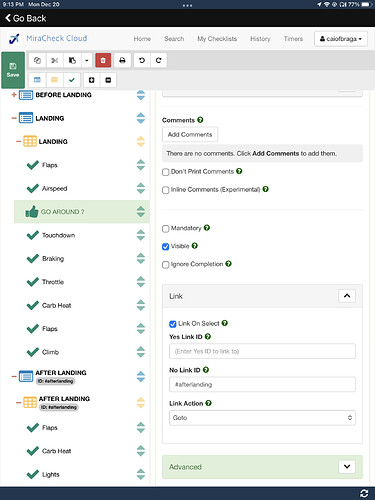 You are close. You only put the # sign on the No Link ID property. The ID’s themselves should not have a # sign before them. Also, make sure to only put a unique ID on one item in the outline. 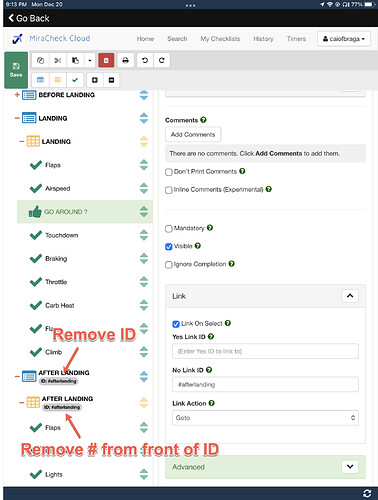 Thanks Jeff. It’s working now. Just to let you know this is a great piece of software you wrote. It takes a bit of time and savviness to work it out but I definitely like it. This is my first checklist and been fine tuning using x-plane. It’s amazing the difference it makes when you have “Mira” talking to you. It does feel like having a co-pilot.

Thanks. Version 5 to be released very soon has Flight Simulator integration where your copilot will be getting real-time info of your position and will be able to do some interesting things with it.